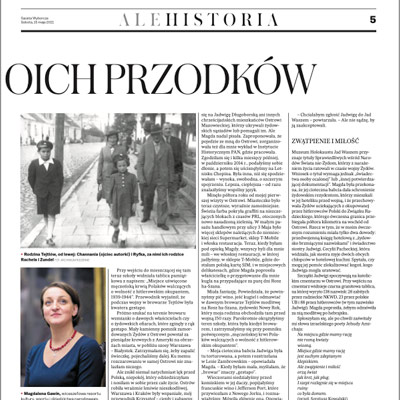 I wrote an article about how my family history intersects with the current situation in Poland. It appeared in Polish in the daily newspaper Gazeta Wyborcza on June 9th.

Below is the opening of the English text:

My Jewish Family Lived in a Small Town in Poland for Eight Generations. So Did the Family of Poland’s Deputy Minister of Culture and National Heritage.

One summer evening in June 2014, I received an email from Dr. Magdalena Gawin, in Warsaw. Gavin now serves as Deputy Minister of Culture and National Heritage for Poland’s conservative Law and Justice government, but at the time she was, like me, just an academic.

Gawin’s father and mine both hail from the same Polish town, Ostrów Mazowiecka, which is located midway between Warsaw and Bialystok. The subject of Gawin’s email was not our fathers (hers Catholic, mine Jewish) or even the town where they had lived, but rather her great aunt Jadwiga Długoborska, who had owned a small hotel in town and had hidden Jews there during WW2. Near the end of the war, she wrote, Długoborska was informed on by a maid and was arrested, tortured, and murdered by the Gestapo. Now on the 75th anniversary of her great aunt’s death, Gawin was organizing a commemoration ceremony for her in Ostrów.

“I invite you on behalf of all family and city,” her email concluded, “we will be honored.”