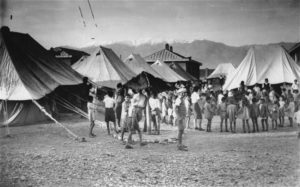 In the middle of World War II, Tehran became a haven for both Jewish and Catholic Polish refugees who were welcomed as they arrived from Soviet Central Asia.

Yom Kippur in Tehran in 1942: A story about Iran, Judaism and anti-Semitism

After the older children entered, the locals gave them little gifts and sat with them for the Kol Nidrei prayer. Then, when they noticed the younger children were absent, they sent a car to fetch them, despite the strict prohibition against driving on Yom Kippur. Everyone was already seated by the time the 5- and 6-year-olds and the toddlers walked into the synagogue. When the worshippers saw the children, they all began to weep.

This essay tells how my father and hundreds of other Jewish refugee children attended Yom Kippur services in one of Iran’s ancient synagogues – Haim Synagogue – about a month after escaping from the European Nazi occupation. Without their parents. Without speaking Persian. Sitting in their own European section in the synagogue.

This essay argues that in emotionally and politically fraught terrains tragic literature may offer an embodied, affective critique of the existing political order that is more effective than theoretical-didactic critiques.

For centuries, readers and critics have interpreted Darcy’s aloof and fastidious manner as a product of social class or personal choice. But reading those passages today, with our heightened awareness of the spectrum of neurological difference, a different reading is possible.

Post Trauma Versus Inter Trauma in the U.S. and Israel

Annals of Depression and Anxiety (November 12, 2014) (with Sharon Dekel)

The question of whether prior traumatic events increase post-traumatic distress or bring about habituation to living with trauma in the general population remains unresolved. We address this question by comparing and contrasting the psychological impact of a singular trauma – the World Trade Center attacks in the United States – with that of continual trauma- the scores of suicide bombings that took place in Israel during the second Intifada.

The Global and the Intimate: Feminism in Our Time (Columbia University Press, 2012)

An introduction to my book in progress, a memoir of my search after a group of Polish Jewish children who fled Nazi occupied Poland via Russia, Uzbekistan, and Iran, ultimately reaching British controlled Palestine.

A discussion of Agnon’s analysis of nationhood as a means to erasing racial difference. The essay compares between works by Agnon and Zora Neale Hurston.

Citizenship and Sacrifice: Moshe Shamir’s He Walked Through The Fields

Analysis of citizenship and sacrifice in Moshe Shamir’s canonical novel-turned-play He Walked Through the Fields (1947).
Arguing that the underlying aesthetic, emotional, and political sensibility of the play is “tragic” in the classical sense, the article demonstrates how this tragic sensibility served to both portray and mask the fundamental contradictions of citizenship in the immediate post-statehood era.

‘From Where Have I Eaten My Poetry’: on Bialik and the Maternal

The article is an analysis of the relationship between eating and writing in Hayyim Nahman Bialik’s Bialik’s poetry. Using Melanie Klein’s psychoanalytic theory of ambivalence towards maternal feeding, it argues that such ambivalence is the basis of the poet’s identification with the national project.

‘Who Taught This Foreign Woman About The Ways And Lives Of The Jews’: George Eliot And The Hebrew Renaissance

This essay centers on the Hebrew translation and the reception of George Eliot’s Daniel Deronda among Hebrew readers of the late nineteenth century. It provides a historical account of the various translation stages and analyzes the character Deronda’s importance as model citizen among aspiring nationalists. It also investigates Eliot’s place, and the place of women in general, within the predominantly male nineteenth century Hebrew reading public. 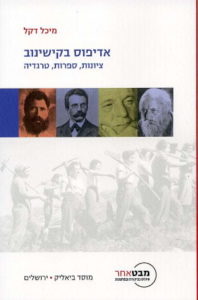 Tragedy, both as an aesthetic form and an emotional-political category, appeared in turn of the century Hebrew literature. It rose  alongside and in service of the Jewish national project as a “new kind” of response to Jewish suffering, but also in parallel to the resurgence of Greek and Elizabethan tragedy in European culture at large. In Oedipus in Kishinev, Mikhal Dekel discusses tragedy and its meaning in Hebrew works by H.N. Bialik, Micah Berdycevsky, Y.H. Brenner and others.