A revelatory history, a saga of flight and welcome, of death and head-down survival, a powerful narrative built for this moment. Dekel’s sweeping storytelling is marked by heartbreaking restraint and historical sensitivity.”

—Charles King, Georgetown University, author of Odessa and Midnight at the Pera Palace 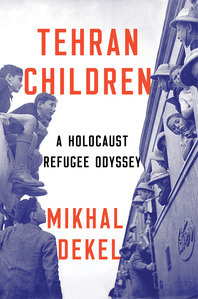 This story begins with one and a half million Polish Jews who by late 1939 find themselves living within Soviet borders, whether because their towns fell under Soviet occupation or because, like the author’s father, they had fled there from the Germans. It continues when up to a third of these are deported, alongside other Polish citizens, to gulags and “Special Settlements” in the Soviet Interior, where they suffer extreme deprivation and once “liberated,” journey to the Soviet Central Asian Republics.

Some Polish Jews were later evacuated alongside Catholic Poles to Iran, India, and Mandatory Palestine. Mikhal Dekel traverses the globe in these refugees footsteps, visits archives, locations and people in Uzbekistan, Poland, Russia, Israel and (through a proxy) Iran, meets with former refugees and current residents, and pieces together not only the story of her father and hundreds of thousands of survivors like him, but of the geopolitical shifts that their arrival had put in motion in the Soviet Union and the Middle East.

Along the way she converses with Polish nationalists, Russian oligarchs and human rights activists, Iranians, Korean Uzbeks and Israelis, painting a story of interlinked and divergent histories, of death and survival, of hospitality and cruelty, and of the politics of twenty-first century memory and historical amnesia.

A website in progress about the book, including archive materials, is available at TehranChildren.info

An early synopsis of this story appeared under the title “Tehran Kids” in the anthology The Global and the Intimate. You can read that article here.

“Though their story is seldom told, most Polish Jews who survived the Holocaust did so by taking the road east, into the Soviet Union. In tracing the harrowing journey of her father’s escape, Mikhal Dekel provides a multi-layered and nuanced account. . . . Her exploration of the peculiar refugee world in 1940s Tehran — especially the tense relations between Jewish and Catholic Polish refugees in that city – makes the book an important and timely addition to the literature of the Holocaust and modern refugee history.” — Tom Reiss, author of The Orientalist and The Black Count

“In this brilliantly conceived narrative, Mikhal Dekel reconstructs her father’s and grandmother’s circuitous journeys by land and sea through Iran on the way from Poland to Palestine in the years of the Holocaust. Retracing their lives as she lives her own, in turn she illuminates a series of unexpected places absent from many maps of the refugee experience of the era. A striking book.”—Samuel Moyn, Yale University, author of Not Enough: Human Rights in an Unequal World

“Tehran Children is a gripping account of Holocaust survival unlike any other. Blending the genres of memoir, history, and travelogue, Mikhal Dekel traces (and where possible, follows) her father’s wartime footsteps across thousands of miles, from Poland, to Soviet Uzbekistan, Tehran and Palestine. Combining the empathy of a daughter with the insight of a scholar, she recovers not only her father’s odyssey but that of hundreds of thousands of Jews who survived the war in harsh exile in the Soviet Union and Central Asia. This is one of the greatest, largely untold stories of the Second World War.”—Tara Zahra, author of Great Departure: Mass Migration from Eastern Europe and the Making of the Free World