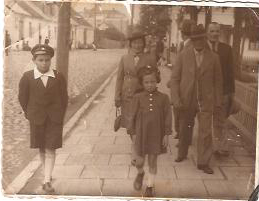 On September 6, 1939, my then twelve-year old father, alongside eleven members of his family, escaped from their hometown in eastern Poland towards the Soviet border. They knew the Wehrmacht was coming. They knew Nazi ideology targeted Jews. They read German papers. Still they hesitated whether to flee or not. Fleeing a home where your family has lived for eight generations, where you own businesses and belong to a huge clan, is momentous. From the moment you flee you are a refugee. But they fled and, as it turned out, increased their chance of survival. Half of them survived, including my father.

Survival stories are invariably told backwards. We know how they end. But when I set out to write my father’s wartime story I wanted to tell it from beginning to end, to un-know what I knew eventually happened to him and his family. I wanted to recreate – from testimonies, interviews, archival documents and travel – the tentativeness, uncertainty and anxiety of every turn and twist they took, beginning with that initial decision to flee their home. I could not imagine that five months after publishing the book I wrote about them, I too, in New York, would be faced with a tentative, uncertain moment of my own.

As I contemplate whether to stay put at home in New York or to flee (To my elderly mother in Israel? To my sister in Boston?), I think about my grandparents’ first deliberation. No Nazi is on route to kill me, but neither did they know, in September 1939, that Nazis were on route to kill them. (During WWI they survived a German occupation that was bad but not deadly). What they faced was a moment of dread, entrapment, complete uncertainty and two bad choices: a German or a Soviet occupation? Staying put or fleeing into the wide world with masses of others?

We are, of course, not in that moment. But we are in a moment. We know that something will soon begin. We don’t know the scope. We don’t know the ending. And as I walked through Central Park yesterday, in the gorgeous summery day, with people still huddled together on benches, picnicking and playing baseball, I wondered if this moment resembles even a little their calm before the storm. It’s a ridiculous comparison, I tried to tell myself, but could not quite shake off the photo I have of my smiling father and his well-dressed parents that was taken four months before the war.

But the years spent researching my father’s wartime past are now also weirdly consoling. They have taught me not only about tentativeness and tragedy, but about other things: about the power of institutions – aid organizations, political parties, governments – who through even imperfect, global cooperation can save lives; about people’s boundless capacity to survive and even thrive far outside their comfort zone. It has taught me that even in a world without food and penicillin, most people will survive. It has taught me that life, even when upended, is full of surprising outcomes, including surprising acts of generosity. It has put things in proportion.

Mikhal Dekel is Professor of English at the City College of New York and author of Tehran Children: A Holocaust Refugee Odyssey.

Read reviews of "Tehran Children" and listen to podcast interviews on the Media page.